Here’s a summary of some of the major news and recent changes in club sport, with further signs of relaxation of lockdown.
END_OF_DOCUMENT_TOKEN_TO_BE_REPLACED

Final Whistle™ is an app designed for clubs, created by David Frazier and Ricky Kundi in association with the hate crime charity, Stop Hate UK.

Together, their aim is to make it easier to report, combat and ultimately end hate crime in all sport and the broader community.

A hate crime is defined as hostile behaviour or prejudice based on a person’s disability, race, religion, sexual orientation or transgender identity.

The app, that can be purchased and branded in your club’s colours, is geared towards reporting hate crime in sport confidentially. It works by: 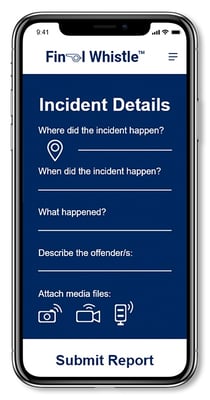 Apart from acting as a deterrent, especially if the participating clubs promote the fact they’re using this app, it demonstrates sports clubs are serious in combatting hate crime in grassroots sport.

The location technology means exactly where an incident took place can be proved which will be helpful in future investigations.

It’s one way of taking a stance against hate crimes and to find out more, individual clubs can get in touch with David via https://www.finalwhistle.app.

Note: This isn’t an app freely available to the general public on Google or Apple platforms - because of the cost of managing the service (Stop Hate UK would manage the reports).

Here’s a summary of some of the major news and recent changes in club sport, with further signs of relaxa...
END_OF_DOCUMENT_TOKEN_TO_BE_REPLACED

If you’re in the mood for some sports gaming, you’ve come to the right place. There has never been so muc...
END_OF_DOCUMENT_TOKEN_TO_BE_REPLACED