Pitchero's non-league teams of the season

Pitchero's non-league teams of the season 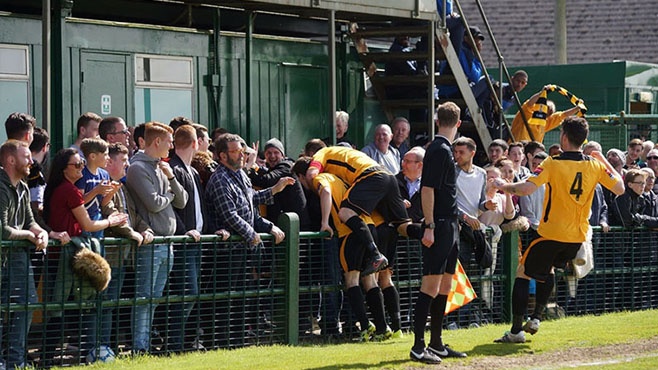 With another season of drama coming to a conclusion at non-League level, it's time to doff our caps to 44 outstanding performers by compiling them in various end of season teams from the non-league.

To help us along, our resident non-league expert Steve Whitney lent us his suggestions for the best players he's seen take the field in the National League, EVO-STIK and Ryman Premier Divisions. 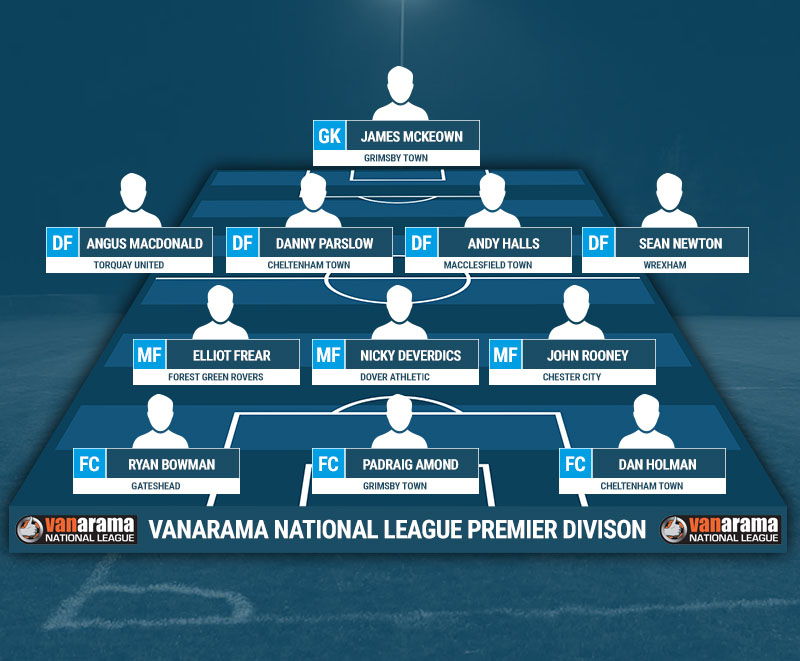 Between the sticks is Grimsby Town stalwart James McKeown, who is no stranger to recognition as part of the Grimsby Town setup. Awarded player of the year at Grimsby at the end of both the 2012-13 and 2013-14 seasons, McKeown goes one better in 2015-16 with a place in Pitchero's team this year after another impeccable year in goal.

Across the back four, Wrexham's reliable left-back Sean Newton. An ever present in the Dragons season, Newton's season goal tally of 7 brings threat from defence in the form of his pinpoint free-kicks.

Alongside him sits Danny Parslow. The Cheltenham man marshalled a defence that let in only 30 goals this season, and Torquay United's young captain Angus MacDonald sits beside him after showing impressive leadership skills this season. Completing the back-four is Macclesfield's Andy Halls, the England C international who missed just one league game this season for the Silkmen. 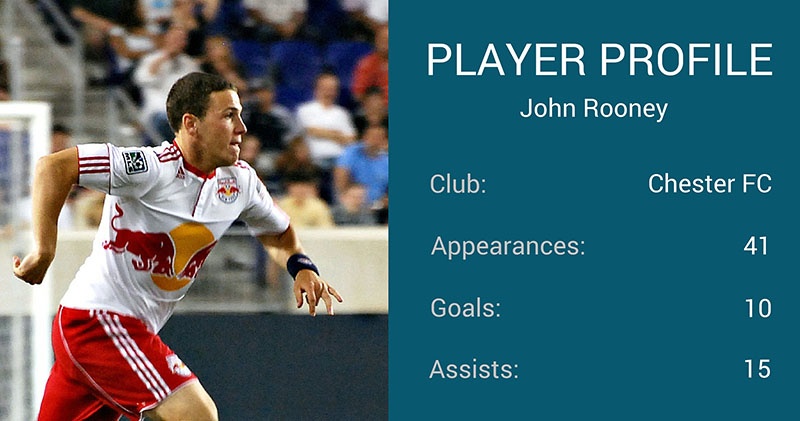 In midfield, leadership comes again in the form of assist-machine Nicky Deverdics, who lead his side Dover Athletic to a playoff semi-final, where they lost to Forest Green Rovers.

Providing bucket loads of creation and attacking impetus, Chester's John Rooney takes his place in the XI. 10 goals and 15 assists translates into a fine season for Rooney, who appears to have found a home at the Deva Stadium. Finally, Forest Green Rover's Elliot Frear adds his club Players Player of the Year gong with arguably a greater prize, a place amongst Pitchero's National League team of the season.

Our front-line three contributed no less than 76 National League goals this season, 16 of which went to Gateshead frontman Ryan Bowman. Impressive in his first season at the International Stadium, Bowman finished as a runner up in their Player of the Year awards.

The remaining 60 goals were shared between Grimsby Town's Padraig Amond and Cheltenham Town's Dan Holman, who both fired their teams to successful National League seasons. Amond will be looking to add to that tally this weekend, after his goal helped book Grimsby into the National League play-off final this weekend. Victory would see Grimsby join Holman's Cheltenham Town in the football league, after he scored more than a third of the Robin's title-winning goals over the course of the season. 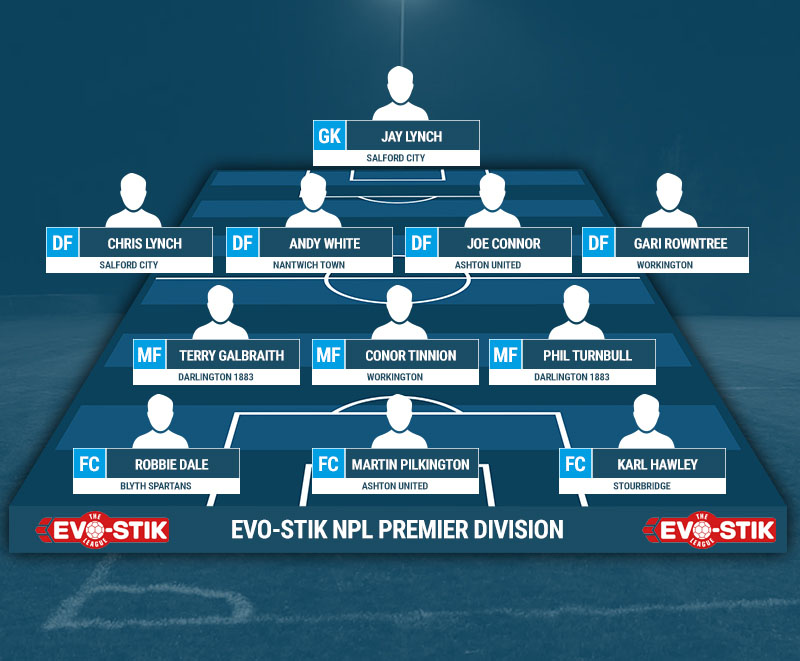 12 league clean-sheets, a clean-sheet in an FA Cup giant killing over Notts County, and even an old fashioned route-one assist are enough to put Salford City's Jay Lynch in our EVO-STIK NPL XI.

Protecting him is Nantwich's Andy White, who has already taken a spot in EVO-STIK's NPL team of season. Alongside him is Salford captain Chris Lynch, a defender who bagged himself a hat-trick at home to Workington back in March. Completing the defence is Ashton's Joe Connor, who plated a vital role in his club's run to play-off semi-finals, and Gari Rowntree, a missing cog in Workington's league run-in which eventually ended in play-off final defeat. 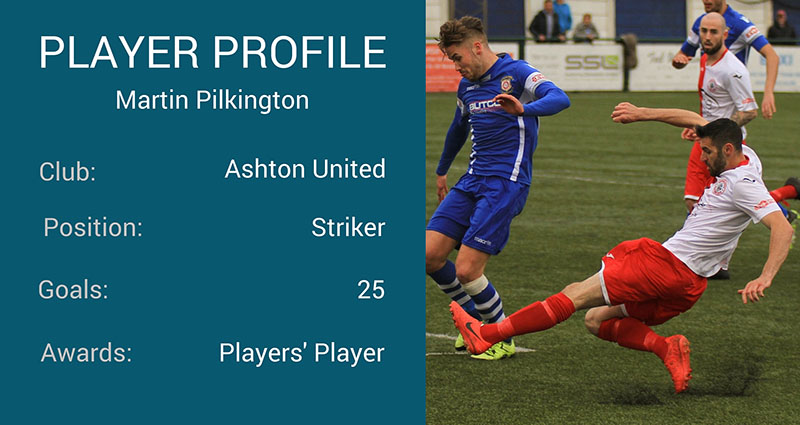 After accumulating a mammoth 104 points over the course of the NPL season, its hard to argue against including a number of Darlington's players in a team of the season. Terry Galbraith chipped in with a vital 11 goals in his 41 midfield starts for the club, and is joined by teammate Phil Turnbull, a fans favourite who has impressed with his endeavour and commitment throughout the season.

Redressing the Darlington balance is Workington's second nomination – this time for Conor Tinnion. 15 goals, 17 assists and 8 man of the match awards make-up a phenomenal season for the midfield man.

Up-top, a man who has received a glut of recognition for his performances over the past couple of seasons. Robbie Dale was EVO-SRIK NPL Supporters' Player and Player of the season in 2015, and came runner-up in the second of those awards this season. Amongst his season highlights were an FA double against Championship side Birmingham City. Joining him is football league veteran Karl Hawley, whose 27 Stourbridge goals handed the 34 year old the golden boot. Rounding off the NPL team of the season is Ashton's Martin Pilkington, whose 25 goals were the most for any player that didn't include a single penalty. 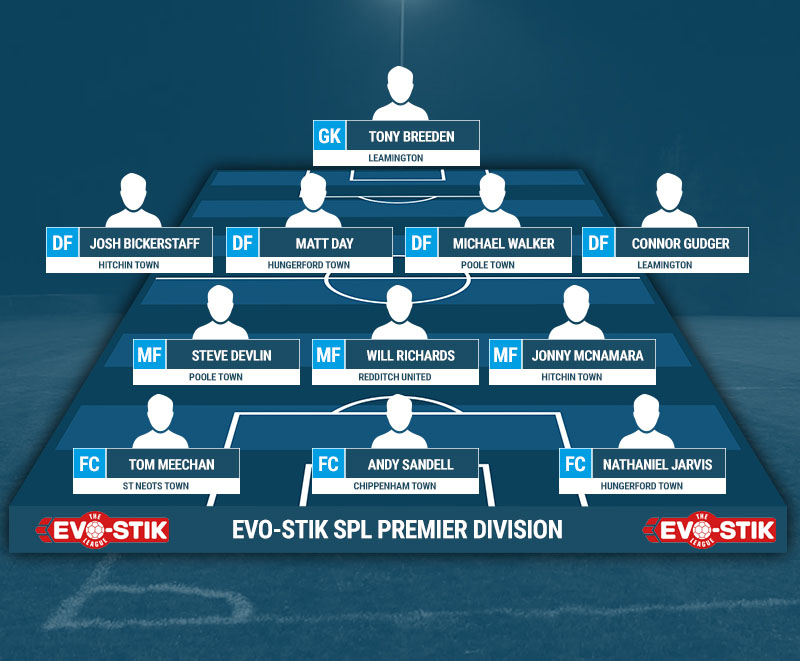 Onto the EVO-STIK Southern Premier, where Leamington goalkeeper Tony Breeden gets the nod as our number 1. Despite scoring 24 less goals throughout the season, Leamington's organised defence held off the challenge of Kettering Town to make the final play-off spot thanks to brutish defensive line.

That impressive work is also recognised along the backline, as Connor Gudger takes his spot in defence. Joining him is a key defender from play-off victors Hungerford Town, as Matt Day takes his spot after a fine season marshalling a resolute defence. League champions Poole Town, who leaked a paltry 35 league goals this season, are represented by Michael Walker, and Hitchin Town's Josh Bickerstaff completes a mean-looking defence. 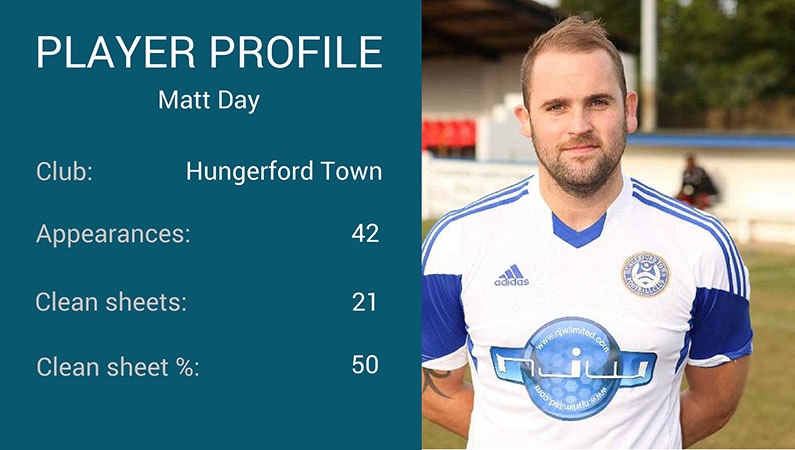 Dropping anchor in midfield is Will Richards, who has excelled in his fourth spell with league runners-up Redditch United. Completmenting him is Poole's Steve Devlin, who's bursts from midfield have bagged him 9 league goals, and Hitchin Town's Jonny McNamara.

The front-three includes Chippenham's Andy Sandell, whose seven goals during January elevated his club to second place. Their reliance on Sandell became clear during the league run-in, as only 1 goal in his final 8 appearance saw Chippenham, miss out on the play-off spot. Joining him his Tom Meechan. Snapped up after scoring 53 goals for Godqmanchester Rovers the previous season, Meechan translated that form to a high level; his 21 league goals coming only second to Sandell in the chase for the golden boot. Finalising the EVO-STIK Southern Premier XI, Hungerford's Nathaniel Jarvis, who fired in over a quarter of his side's goals this season. 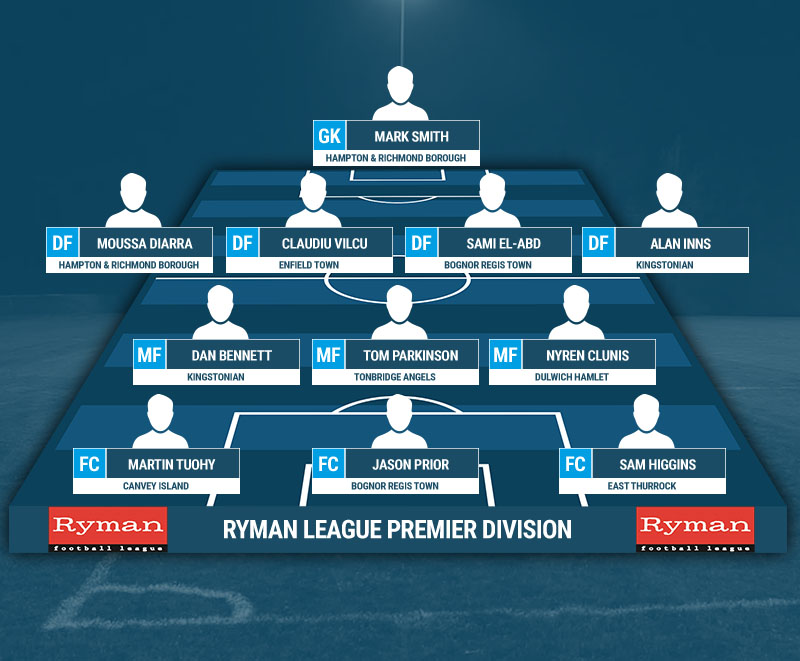 With only seven defeats over the course of the Ryman League season, Hampton & Richmond keeper Mark Smith gets the nod as the league most impressive goalkeeper in the 2015-16 season.

And defender Moussa Diarra gets similar recognition by making the team of the year cut – the fullback has contributed a whopping 14 league goals this season on his way to scooping the club's Player's Player of the Year award. On the opposite flank, the ever reliable Alan Inns, who notched up 38 league appearances for Kingstonian this season.

Sandwiched in-between them is Enfield Town's Romanian defender Claudiu Vilcu, who can pride himself on helping Enfield keep 4 clean sheets in a row during the league run-in and almost sneaking the club into the playoffs as a result. Finally, Sami El-Abd represents our nod towards Bognor Regis Town, as he provided the rock to the Ryman League's meanest defence. 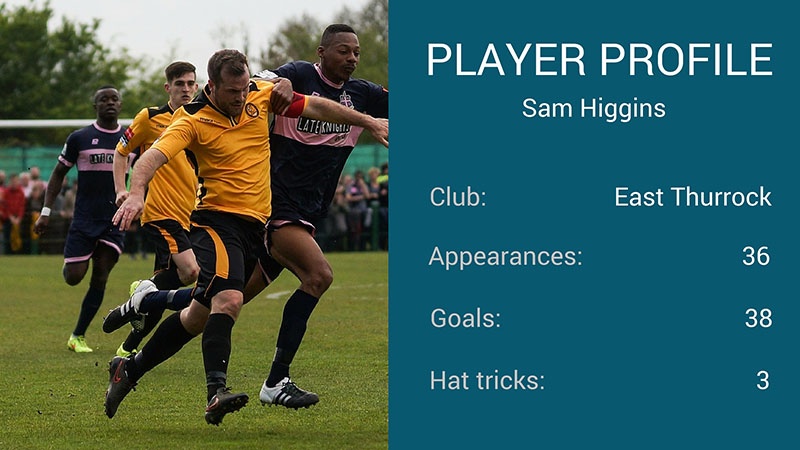 Dan Bennett of Kingstonians makes the cut in midfield, in no small part down to the 18 goals he provided this season from the middle of the park. Joining him is Tom Parkinson from Tonbridge Angels, who excelled in their midfield by providing 13 goals, 4 assists and claiming 4 man of the match awards. Dulwich Hamlet's Nyren Clunis also takes his place in the XI, supplying a constant feed of quality service which brought the midfielder 12 assists this season.

In a hotly contested race for the Ryman League golden boot, East Thurrock's Sam Higgins took the prize courtesy of 38 league goals (he actually scored 45 in 44 appearances in all competitions). Second only to Higgins is Bognor's club captain Jason Prior, who notched 36 goals as the Rocks pushed table-toppers Hampton all the way in search of automatic promotion. Canvey Island Martin Tuohy completes the XI, as his 24 goals helped to lessen the damage done by the second worst defence in the league.

Your team of the season

Thanks to Steve Whitney from Pitchero Non-League for making his selections for this year's teams of the season.

But do you agree with him, or has he made some alarming omissions? Let us know in the comments below.

One-off payments collected via GoCardless can now be deposited into your club bank account 7x faster than...
END_OF_DOCUMENT_TOKEN_TO_BE_REPLACED

From January 2022, UK clubs who are registered as charities/non-profit organisations or Community Amateur...
END_OF_DOCUMENT_TOKEN_TO_BE_REPLACED

Grassroots sports funding is a topic that’s always going to be relevant for clubs to improve facilities, ...
END_OF_DOCUMENT_TOKEN_TO_BE_REPLACED