The greatest female footballers in the world

As you know, your club website is your online headquarters. Your single source of truth around team selection, sponsors, club fundraising and much more. With lockdowns, stuttering fixture li...
END_OF_DOCUMENT_TOKEN_TO_BE_REPLACED

The greatest female footballers in the world

Over the years, women’s football has produced some incredible talent. With the interest in women’s football going from strength to strength, we thought it would be a great idea to take a trip down memory lane.

As we all know, there are hundreds of world-class players and recognition of these players is on the up. We’ve picked out just some of the best female players in the world and their incredible achievements.

Let’s kick off with one of our home girls, Kelly Smith. She retired earlier this year after an incredible 117 caps for her country. Within that time, she earned her title as England’s all-time record goal scorer, with an impressive 46 goals for her country.

She also became England's first female professional footballer when she joined American side New Jersey in 1999.

At her time at Arsenal, she won five FA cups and scored six goals in those five finals; an incredible achievement. Once being described as the ‘David Beckham’ of women’s football, it’s fair to say she’s left her mark on English football.

Good luck to @Mark_Sampson and the @Lionesses tonight. Wishing you all be best for the tournament. Go get it 🏆 #WEURO17

After retiring in 2015, Smith has gone on to coach and continues to champion the Lionesses in their quest for victory at international tournaments.

Mia Hamm is a retired international US soccer player. She graced the football pitch to represent her country for a staggering 17 years.

Often described as a soccer icon, Hamm was the face of the Women's United Soccer Association and a huge name not just in America, but around the world.

In 1991, at the age of 19, she became the youngest team member in history to win the World Cup. In total, she’s won two World Cups, two Olympic gold medals and been named twice as FIFA World Player of the Year along with winning U.S Soccer Female Athlete of the Year, Soccer Player of the Year and Sportswoman of the Year over various years by several organisations.

Hamm also held the record for most international goals scored, until her teammate Abby Wambach took over. She remains ranked third in the history of the U.S national team for caps, with an impressive 246 to her name, with 144 assists.

She hung up her boots in 2004 after a more than successful career which earned her the reputation of the best female soccer player in history.

She represented her country for a staggering 15 years and is still classed as one of America’s greatest players. Her trophy cabinet is very impressive with two Olympic gold medals, a FIFA World Cup title, six-time winner of the U.S Soccer Athlete of the Year and FIFA World Player of the Year (becoming the first American woman to win in 10 years). 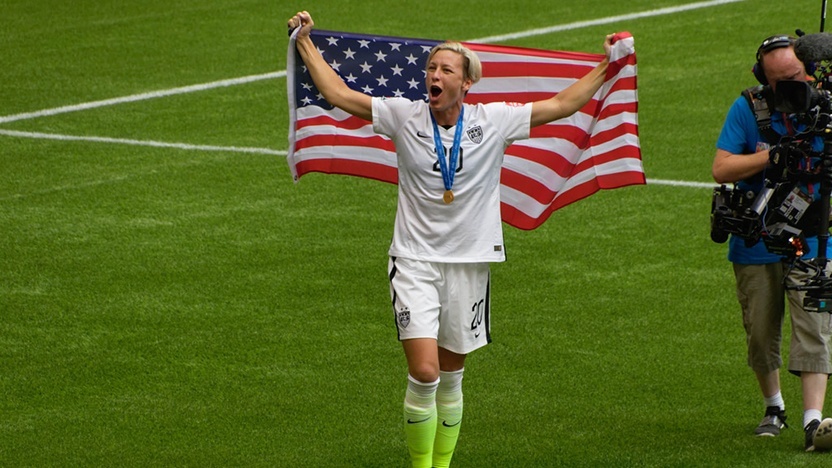 She was also included on the Time 100 list as one of the most influential people in the world. Wambach finally completed her winning streak of the World Cup with the USA at the 2015 competition in Canada before retiring late last year.

Commonly named as Japan’s finest female footballer, she made her international debut at the age of 15, scoring four goals in her first ever match. She then went on to lead her country to a world championship victory at the 2011 FIFA Women’s World Cup.

In 2012, she was awarded the FIFA Women’s World Player of the Year and in the same year helped Japan win a silver gold medal at the London Olympics.

Marta Vieira is unquestionably one the most (if not the most) famous female footballers of the last 20 years. The Brazilian has won Fifa's World Player of the Year award five times in a row between 2006 and 2010.

Often called 'Pele' after Pele himself, Vieira has been awarded two Golden Boots and the Golden Boot during various World Championships.

In 2016, the Brazilian represented her country at her home Olympics in Rio, no doubt a special moment for her.

The Brazillian forward champions women's football across the globe through her campaign work and has become one of the biggest names in modern football.

She now plays for the recently created Orlando Pride in the United States.

Germany's Birgit Prinz has had an impressive footballing career, scoring a game-winning goal during her international debut against Canada. She also scored the winner for Germany in the 1995 UEFA European Championship.

Prinz continued to lead her country to victory when Germany won the 2003 and 2007 Women’s World Cup, She earned herself the Golden Ball in 2003 and the Silver Ball in 2007.

She has some pretty impressive stats to her name too. Out of 214 international appearances, she found the net 128 times.

She was also named German player of the year eight years running, making her one of the best players in Germany’s history.

At club level, Prinz has been just as spectacular over the year, scoring 282 goals in as many matches for FSV Frankfurt, FFC Frankfurt and the Carolina Courage.

Christine Sinclair made her debut for the Canadian senior team aged just 16. She ended up becoming the tournament’s leading goal scorer.

After starting out football on a boys’ team, aged 14, Riise swiftly became a star in Norway, making her debut for the country in 1990.

In this, she became one of only three women in the world to win the Olympics, World Cup and the European Championship. Riise retired in 2006 with 188 international caps to her name.

Nadine Angerer is one of the most famous goalkeepers in the world. Since making her debut for Germany in 1996, Angerer earned 146 caps.

She didn’t start off as Germany’s number one though. She understudied Silke Rottenberg through major tournaments until Rottenberg suffered an injury just before the FIFA Women’s World Cup in 2007.

Angerer took over and the rest is history as they say. Germany went on to win that particular World Cup, the goalkeeper having kept a clean sheet. She also saved a crucial penalty in the final.

Penalties soon became the thing Angerer was remembered for. She made two vital penalty saves against Sweden and captained Germany to their European title in 2013.

In 2015, she denied France a quarter-final win in the World Cup with a crucial save, allowing them to progress to the semi-finals.

With the start of 2021 comes a feast of sport to look forward to. Coronavirus caused widespread cancellat...
END_OF_DOCUMENT_TOKEN_TO_BE_REPLACED

The best sporting moments of 2020 might sound like the briefest of shortlists due to Covid-19. It is fair...
END_OF_DOCUMENT_TOKEN_TO_BE_REPLACED