The growth of football in the USA

Sport England, along with national governing bodies, have dedicated resources to help clubs in the current situation.
END_OF_DOCUMENT_TOKEN_TO_BE_REPLACED

The growth of football in the USA

In recent years, football (soccer) has been on the rise in America with more and more people deciding to take up the sport, favouring it over the established American sports such as Baseball and Softball.

We don't have to look too far back to remind ourselves how the MLS (Major League Soccer) very nearly folded, only five years after its creation in 1996.

The MLS journey ultimately started when the USA hosted the 1994 World Cup. 3.6 million fans attended the tournament and a further 11 million tuned in for the USA's round of 16 match against Brazil.

Despite the USA making the quarter-finals of the 2002 World Cup, the MLS still wasn't firing properly until 2007. This was the year when the big money ESPN deal was made, an eight-year TV deal worth around $8 million, a massive step in the right direction for the league.

2007 was also the year England football icon David Beckham decided to leap across the pond to join up with LA Galaxy, a huge scalp for the MLS and one that really put the league into the spotlight of world football.

Fast forward 10 years and there are no signs of the MLS' growth grinding to a halt. In 2015, crowd attendance averages in the MLS were recorded at 21,574 per game which was over a 12% rise from 2014's figures. Compare this to the Premier League's 36,176 and you can see, for a growing league, the number really isn't that low. To reiterate, La Liga's average attendance in 2015 was 27,021, a league that boasts two of the biggest clubs in world football.

Participation On The Rise

In 2016, there were more people than ever playing football since 2009 as the participation levels keep on rising. At the end of 2009, there were 11.12 million people playing soccer. This figure has continued to rise and in the spring of 2016, participation levels reached 15.81 million, that's an impressive 4.69 million extra people playing soccer in just seven years.

Incidentally, this rise came in the same year the USA women's soccer team won their most recent World Cup over in Norway. Thier dominance on the world stage will be helping those levels stay higher than ever before.

2016 was also the year the Copa America tournament was held in the USA, with the hosts finishing in a respectable fourth position, only to be beaten by Columbia (3rd), Argentina (runners up) and Chile (winners).

Two years earlier and it was the men's international team winning the hearts of the nation as they reached the World Cup round of 16, only to be narrowly beaten in extra time by a heavily favoured Belgian outfit featuring some of the most exciting players in world football.

The international success may also be a reason why the number of kids playing soccer in United States high school's has seen a steady increase. 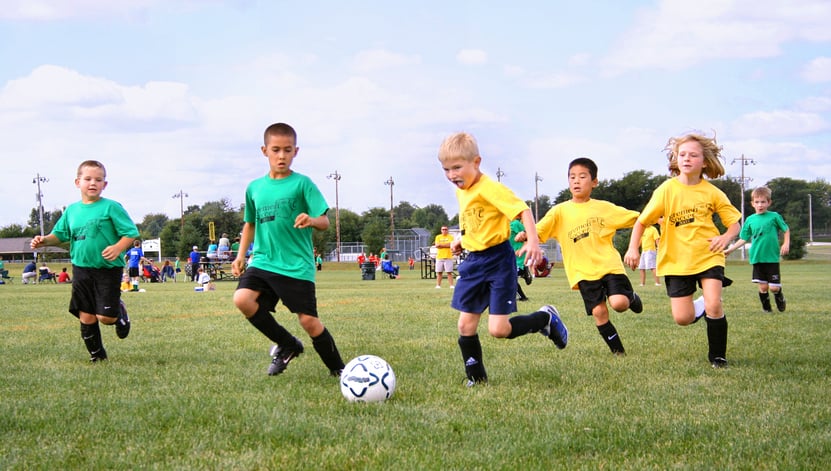 The US Youth Soccer Association, the largest youth sports organisation in the US, provides us with a profound figure that again reiterates just how far soccer has progressed in America. In 1974, the USYSA had a low amount of around 100,000 members. 30 years on in 2014 and their total number of registered players was around 3.2 million, that is some leap. Along with these numbers, the amount of coaches and volunteers now involved with soccer stands at 900,000.

Since Beckham's arrival, there has been a whole host of world class footballers coming across from Europe to play in the MLS. Former Monaco, Juventus, Arsenal and Barcelona striker Thierry Henry, arguably one of the best strikers the world has ever seen, was the next huge name to make the switch when he joined New York Red Bulls in 2010.

Henry made an instant impact in New York, helping the Red Bulls to the Eastern Conference title in 2010. Speaking to The Red Bulletin (www.redbulletin.com), Henry described the transformation and progression of the MLS as "amazing".

"The progression has been amazing. The league has changed a hell of a lot, nearly everybody has a stadium now. Everybody has wonderful training facilities. The fans all wear the jerseys. For me, it’s changed day and night."

The striker's comments speak volumes about the very positive change for soccer in the US since 2010. After the Frenchman, many big names decided it was their time to take the plunge and see what the MLS was all about, as they were nearing the end of their careers.

Former Premier League goal scorers Tim Cahill and Robbie Keane were two of the first big names to enter the MLS, with Cahill joining up with Henry in New York and Keane heading to the LA Galaxy.

Two of the biggest names in the Premier League's history also decided they would go and see out their careers in the States. Steven Gerrard (LA Galaxy) and Frank Lampard (New York City) called time on their illustrious English football years to head to the US, further enriching the MLS's image.

Both seemed to be very pleased as soon as they were out there, with Gerrard saying he was "very impressed with the standard of training" during his first few sessions with the Galaxy and although he didn't stay for long, comments and the impression someone like Gerrard gave to the MLS is priceless for the league.

As more players make the trip across the Atlantic, the future of the MLS looks bright. Earlier this year the MLS franchise signed a deal which will see at least 22 games from the 2017 regular season broadcast on the social media channel. This is one way the MLS is trying to interact with fans and drive their social media forwards in a bid to further grow the league.

The MLS is also set to produce 40 exclusive “Matchday Live” shows on Facebook on match days, featuring highlights and analysis, exciting times for all MLS fans and it looks likely that the league can keep on growing.

Sport England, along with national governing bodies, have dedicated resources to help clubs in the curren...
END_OF_DOCUMENT_TOKEN_TO_BE_REPLACED

The latest coronavirus update from the Prime Minister set out further relaxation of lockdown rules in Eng...
END_OF_DOCUMENT_TOKEN_TO_BE_REPLACED

Sport England funding for clubs is one of the key areas of funding to target, whether that’s for an infra...
END_OF_DOCUMENT_TOKEN_TO_BE_REPLACED