How to get sponsors for your sports team

We’ve made it easier than ever to invite new members to join your club.
END_OF_DOCUMENT_TOKEN_TO_BE_REPLACED

How to get sponsors for your sports team

Sponsorship is likely to be your club's primary source of income. If it isn't then you're missing out on a significant opportunity to inject revenue and other helpful resources into your club.

If you're looking to ramp up your sponsorship efforts, or even if you're just starting out, finding the right partner in a sponsorship deal is half the battle.

Here's what you need to consider.

In an increasingly difficult financial landscape, convincing businesses to part with their money to support a local, community-driven club can be a tough task.

To save you a load of time and help really nail the companies you do want to target, save on a blanket plan asking every business under the sun, refine your formula for finding potential partners and put all your efforts into bringing them onboard.

Take in all the pointers below and apply them to your club's sponsorship push before you start drawing up a list of potential targets.

Look around your club

Throughout your attempts to find new sponsors, you'll find that those who are invested in your club and what it stands for are more likely to be interested. Your club is a set of values, providing an important service to your community. Finding a person or company that are in some way connected to these values is one simple way of getting attention. 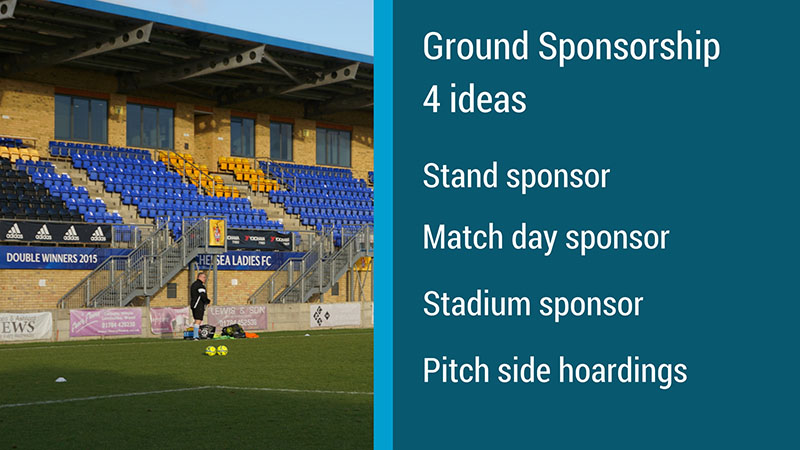 To start, why not look inwards? You'll find no greater sense of affiliation with a cause than those who are actively involved in it every weekend.

Chances are your club is packed full of local business owners or workers who are employed by those local establishments. Each one of them is a potential target, even if they have no particular affiliation with sport. As servants of the local community, you can collaborate with one another, using what brings you together – your club.

Look around your community

As an extension of the point above, your community will likely be full of local businesses that don't necessarily have that direct link to your club (via existing members). Still, there's one important connection that will resonate with both parties and the local community. Namely, that very community.

Take a look around your local area and note down any particularly interesting companies that you could strike up a decent partnership with. Again, these don't have to be sports related. Both of you serve the same geographical area, and investing in those shared values will strike a cord with the community and bring about mutual benefits.

These can be particularly useful when looking to bring in new members. Harnessing the reach of other local businesses is one route of accessing an audience that might be interested in joining your club.

Think about their customer base. Do they attract an audience that matches who you want to attract to the club? If so, ensure that any sponsorship deal is two way – allowing you a pathway to reach out and sell your club to them.

Can you go national?

Or maybe even international? There's nothing wrong with a slice of ambition, and leveraging the might of a major brand could elevate your club to a new level.

To ensure you don't waste your time chasing Google or Apple for a sponsorship deal however, you need to do your research in advance. A number of the world's biggest brands are already invested in campaigns that look to give back to community sport, some of which you might be able to piggy back on.

Take Nike's Partner club scheme. Those few football clubs that are lucky enough to get on the programme receive coaching course bursaries, access to other club workshops at St. Georges Park and a few other helpful benefits to help grow your club.

But above all, it affiliates your club with one of the world's premier brands. Harnessing the Nike name can be a powerful tool in elevating how your club are thought of by those from outside the club. For potential new members, rival clubs and leagues and other smaller businesses, suddenly they're looking a club associated with Nike – bringing a exciting draw to getting involved.

Note: Do bear in mind that to qualify for Nike's programme, you need to become an FA Charted club (info on how to sign up for that is here)

McDonald's also run a similar scheme (again in football in the UK), where they kit out youth teams with a brand new strip to wear on the weekends.

Obviously, these are nationwide campaigns from major corporations who are actively getting involved and helping out community clubs – and that is what provides the hook between them and your club. To draw in a major name, you'll need a similar hook. If they don't actively engage in projects like Nike and McDonald's have in the examples above, you may need an alternative route to get their interest.

Are their offices based nearby, or have some similar connection to your club or location? If so, they might be willing to put something back into the community by striking up a sponsorship deal with your club. Local branches of major car companies are a great example of this.

Ultimately, you're going to have to think outside the box if you spread your ambition in search of sponsorship.

Think outside the box

As we mentioned before, times are a little tough for some in this economic climate. So “thinking outside the box” is something you'll need to carry into all your sponsorship endeavours.

Traditionally, you probably think of sponsorship deals are being a cash-for-promotion type deal. You approach a business and offer them exposure in exchange for money. Increasingly however, that isn't the case. Lower the risk for partnering businesses by offering a different value exchange.

Equipment is one significant example. Does a local business provide something that your club could make use of, like kit or equipment specific to your sport? If so, it might be less of a risk to a company to simply offload some stock to you, rather than open their wallet.

Thank you to @moorethompson for their excellent, continued support... #BUFC https://t.co/qd3Lcphazt

Ultimately, you need to consider what you want to get out of any sponsorship deal. This is likely to change on a case-by-case basis. If it's the local pie shop for example, could you strike up a deal to let them cater for you on match days – saving you time and raising a little more cash. It's these sort of deals that will really appeal to smaller companies and strike a cord with community members.

If it really is cash you're after, you could still lessen the risk to companies by going for an increasingly popular sponsorship trend – the raffle.

Rather than flat out approaching a company and ask for a significant lump sum of cash, say £200, sell off tickets to a sponsorship raffle at maybe £50. With the risk significantly lowered, companies are more likely to take a punt and throw their name into the hat.

Plus, you could hand a number of sponsorships in one go (main club sponsor, kit sponsor, website sponsor), offering extra chances for local businesses to win.

What can you offer to them?

Sports club sponsorship is a two way street. To convince your target audience to partner with you, they'll also need to see a clear benefit. To ensure your priority targets don't slip away, compile a sponsorship package that outlines everything you can offer to a potential business.

The main thing you can offer businesses is custom. So, your first port of call is to complete an audit of the reach of you club – how many sets of eyes can your club showcase a brand to, and who exactly are they?

Once you start tallying all these up, you'll probably be surprised just how many people your club reach every week. These include:

Get creative with this sort of thing and you'll soon have an impressive number of potential customers that sponsors can access. Plus, if that particular sponsor has a direct affiliation with your sport (say they're a kit provider), then the power of access to those customers is amplified.

Once you've got a solid foundation built on a strong potential sponsors list and package you can offer each of them, it's time to take the plunge and start approaching sponsorship candidates.

There is no absolute method to grabbing the attention of the sponsor and getting their signature on the dotted line. Your approach will likely vary depend on the existing relationship between club and company (if one at all), but you can still follow a basic framework to ensure you're on the right lines.

Read our guide to creating the ultimate sponsorship proposal.

Once you've setup a meeting with a company on the hit list, throw in everything you've compiled on what you want from the partnership and what you can offer them to create a sponsorship proposal that's impossible to turn down.

Sponsorship should be a pillar of your club's revenue growth. For the ultatime guide to growing sponsorship at your club, crammed full of great tips and advice, download our free Ebook below.

We’ve made it easier than ever to invite new members to join your club.
END_OF_DOCUMENT_TOKEN_TO_BE_REPLACED

The Price to Play report by Utilita Energy, with input from ex-England goalkeeper David James, has highli...
END_OF_DOCUMENT_TOKEN_TO_BE_REPLACED