How to be a good sports captain

In any team sport, the fortunes of the team will be sure to improve if players think about the team’s success over personal glory.
END_OF_DOCUMENT_TOKEN_TO_BE_REPLACED

How to be a good sports captain

Out on the pitch, a team is just a collection of 11, 13 or 15 players. To keep them motivated, inspired and willing to leave everything out on the field, they need an individual to lead them.

That's where the captain comes in. The performance of a captain can often set the tone for the entire team, so it's vital the correct candidate is given the armband before the team gets out on the pitch.

To be a successful sports captain, that individual is likely to combine many, if not all, of the following characteristics.

A good captain will embody everything that their team stands for. As the selected leader, the way a captain conducts themselves both on and off the field reflects on the rest of the team.

For that reason, a captain should be setting the standard; an example which others on the team can follow and outsiders can admire. Captains are often selected due to being the most hardworking members amongst the team, and that work ethic is looked upon favourably by those in the team, and those you're competing against.

In times of need, the captain should be the first man out of trenches. Lifting players around them by taking a game by the scruff of the neck, the captain's ethos on the field is often mirrored by their players.

For a successful team then, you need a dedicated and passionate player who leads their team by standing in front of them. That unshakeable work ethic shouldn't stop on the field either, as a captain should be as fully invested in the team's work off the field as they are on it.

So at any social events, club fundraisers and of course on training nights, the captain should embody that team-leading ethos at all times.

Be a provider of positivity

Traditionally, you might think of a captain as an aggressor. A player who isn't afraid to let their teammates know when they aren't pulling their weight, and gets into a few verbal exchanges along the way.

The best captains however, are aware of the needs of every player – and understand that a different approach is required for different players. As a captain, you should be able to judge when to use a firm approach to rouse a fellow teammate, and when a few words of encouragement are more appropriate. 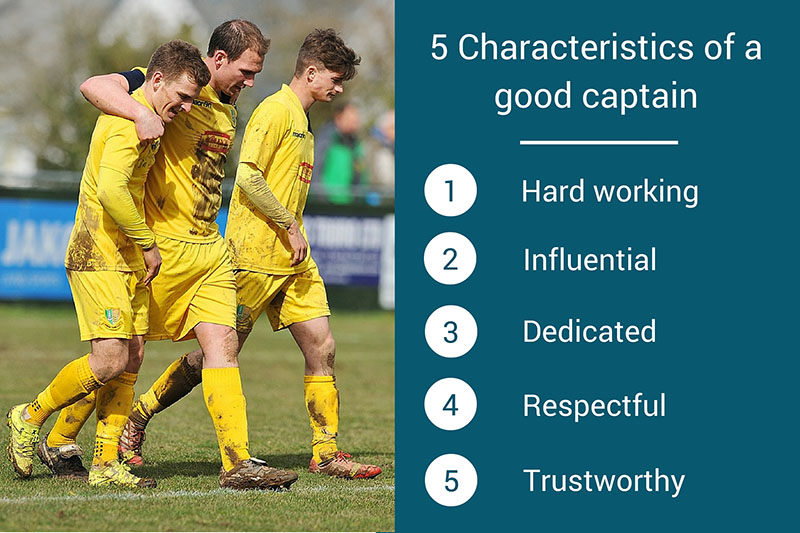 Again, that encouragement stretches beyond match day. Off the field, captains should be encouraging players to better themselves and their skills. Make a connection with players, and they will be more likely to respond to that when you need them to give a little more during a match.

Captains should think of themselves as a motivator, rather than a superior barking out orders. They are still a member of the team, and players won't respond well to an authoritarian captain who they don't feel is making the best efforts to be part of the team.

A captain should also be a great communicator. Able to offer constructive criticism, encouragement and inspiration in the dressing room. As well as a speaker, they should also be listener. Taking on feedback from other players, the old “there's no I in team” comes into play. How a team plays and how they can improve should be a subject open to all those involved. A player that feels like they can come to the captain with anything is one that will earn something that is covered next.

The words above are three key terms that every captain should find himself being described as by fellow players. The best captains put the hours into the club both on and off the field, and in return, they command respect from fellow players. Players will appreciate a captain that they know they can trust. It brings the best out in your performance, freeing you from the worries of making a mistake and allowing your natural skills to flourish.

And that is what links back to being an encouraging captain. In times of need, words of fortitude and optimism work much better both in short and long term. Players will come to respect a captain who acts in the best interests of a team. Unity and trust will follow in time.

A team that trusts one another on the pitch is more likely to succeed. Its a working relationship, and creating a harmonious atmosphere between the players, captain and coach can go a long way to increasing the togetherness of a squad. The captain plays a vital role in maintaining that level of trust.

We've spoken about the respect that a captain should command of his fellow players – but respect should work both ways. A captain that respects their team members is much more likely to get more out of a team.

A successful captain won't abuse their leadership position by considering themselves as an authority over teammates. And it doesn't just stop at the team. Captains must respect other club members, such as coaches and staff, even when differences in opinion inevitably arise.

Sport is a passionate beast, and that goes a long way to explaining why millions of people enjoy it everyday. But on the field, a captain must reign in those emotions when they otherwise might treat match officials and opposition players with disrespect.

Again, a captain sets the tone – and ensuring they treat everyone involved with absolute respect reflects well on the team as a whole, and makes participating in sport a much more enjoyable endeavour for everyone.

Think ahead of the game

Ask your fellow club mates how important an analytical understanding of their chosen sport is, and you'll likely kickstart an engaging debate. It's one however, that you'll rarely come to a conclusion on.

The influence a captain has on how to team plays tends to vary on sport. Some represent merely a leader on the field, whilst others take a vital role in how the team plays, and even who makes the XI.

Take cricket for example, where often the captain works very closely with the coach on wider issues than just going in for the toss. Cricket is considered a very tactical game, where nous and instinct can play a huge role in winning a match. The captain then, is required to call upon their knowledge of the game – and as result it must be considered a vital part of selecting the right captain.

On the other end of the scale, in sports such as rugby and football your tactical knowledge is not necessarily considered as important in becoming a captain. The coach (and his coaching team if they have one) takes on much more responsibility for selecting a team and style of play. A captain's role here is primarily more involved in motivating a team on the field, and becoming a leader throughout that team's activities (covered in various other categories of this post).

Carry out a game plan

In those team sports such as football and rugby, being organised, well-drilled and able to stick to a plan are much more important game-based factors of being a good captain.

The best teams work as a unit. It starts on the training field, and (in theory at least) the harder the team work at getting organised, the better they'll execute that plan on the field. Of all the players in the team, the captain should be most clued up on how that they should be playing. On the field, a captain should be constantly aware of how closely the team are sticking to their game plan, and equally aware of how to fix any holes.

A captain that is well organised on the field is able to think a step-ahead of the game situation, marshalling their troops through the game scenario and plugging chinks in the armour as they go.

Have a relentless will to win

Another factor that directly links into the emotive impact of sport is its intrinsically competitive nature. The will to win gets community sports players out of bed on a blustery Sunday morning, and a captain will often lead from the front in their absolute narrow-minded desire to be the best.

On the pitch, a good captain should be courageous, determined and passionate. Unwilling to throw in the towel, they compete until the final whistle is blown. And once again, it all comes back setting an example, and hoping your actions have a direct influence on those in your team.

Bring it all together in time of adversity

All the subjects covered so far can act as a framework for how a captain should operate at all times when on or off the pitch. And sure, it be easy to take the lead when times are good, but when a captain truly earns their salt is when things aren't looking so positive.

A top-calibre captain will instinctively grasp when their team is struggling, and use all the characteristics outlined above to step up and drag that team back from a point of adversity. It can seem like an easier option to take a backseat when times are tough, but as a captain you can often live and die by how you can motivate a team and turn their fortunes around.

Fundamentally then, a captain that is able to bring their team back from the point of no return will be revered in the clubhouse long after they've gone.

In any team sport, the fortunes of the team will be sure to improve if players think about the team’s suc...
END_OF_DOCUMENT_TOKEN_TO_BE_REPLACED

What qualifications do I need to be a football coach?

There are a number of different football coaching qualifications in England. Choosing your level of quali...
END_OF_DOCUMENT_TOKEN_TO_BE_REPLACED

Writing that all-important match report can seem daunting but it’s a popular part of any club website. Ma...
END_OF_DOCUMENT_TOKEN_TO_BE_REPLACED