5 ways to develop young talent at your club

In order to continue to thrive as a grassroots club, you continually need to promote what you offer.
END_OF_DOCUMENT_TOKEN_TO_BE_REPLACED

5 ways to develop young talent at your club

How can we ensure we are doing our best to give the opportunity for everyone’s talent to be fulfilled?

Here's a series of pointers from Pro Academy football coach Danny Royston on allowing your young players to thrive, flourish and reach their full potential.

The best advice I can give is to get to know your individuals. Each of us learn in a different way, so work out what approach works best with each player. Are they shy and nervous in character? If so don’t ask for hands up answers as they’ll never put their hands up, and don’t make them answer in front of the group. Are they confident and outgoing? Let them demonstrate and ‘show off’ to the group.

When questioning individuals or groups, I try to have an open question such as ‘can you show me a clever position on the pitch?’ and then follow it up with a Why? ‘Why have you chosen that position?’ to check understanding and they haven’t fluked the answer.

I use the word ‘clever’ a lot with younger players. They know what being clever is from school, and recognise when someone is being clever. In time, and again knowing your players, you can expand the vocabulary; outwit, disguise, trick etc.

There are no wrong answers with young players, there are just better ones if they haven’t quite got it perfect. So if they answer wrong, don’t tell them they’re wrong; see if they can choose a better option, sometimes after other players have given their answers as it could spark a better response. 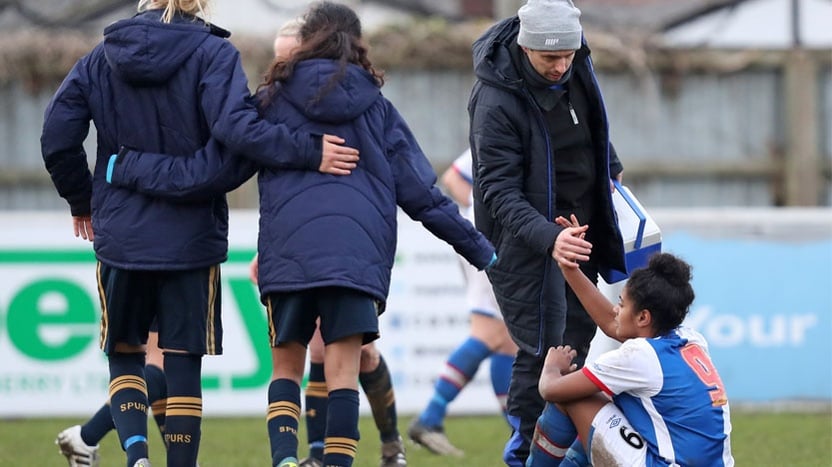 If they get something right, be that an answer to a question or perform a skill to a better standard, praise them. And when I say praise, there are no ‘buts’. If a player does something good, but could have been better (or even better), just praise it.

You learn from your mistakes, so it’s ok to make them. Don’t get me wrong, even if I’ve been working on something in particular and my players are still making mistakes it can feel frustrating, but allow them to do it. As above, praise the positives and they will soon start making more right decisions.

Of course, and depending on the age of players, you may need to pull up a simple error that is constantly arising, but that goes back to point one of knowing your players, how they will react to the feedback you give them and how it is put across to them.

But the main thing about letting them make mistakes is that they come up with the answers, using their own brain and ideas. If you constantly pull players up when they make a mistake then they will only want to do what you say, and that could be stifling the individual flair that could be buried within them.

If you can’t tell, I’m a positive person. I will always look for even the tiniest glimpse to give my players the belief that they can do it. I want my players to be confident, to have that flair and individuality that can be lost by ‘over coaching’. Of course, there are times when they need to be shown what to do, but let them attack that problem in different ways, and when they get it right then massive praise.

For more great advice from the number one in grassroots sports, head to the Coaching section of the Pitchero blog.

Writing that all-important match report can seem daunting but it’s a popular part of any club website. Ma...
END_OF_DOCUMENT_TOKEN_TO_BE_REPLACED

If you want your team to play like Barcelona, you need them to train like Barcelona. If you think that’s ...
END_OF_DOCUMENT_TOKEN_TO_BE_REPLACED